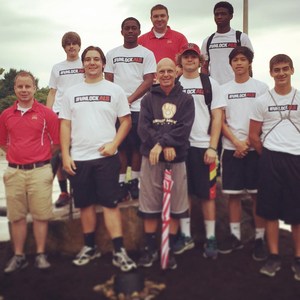 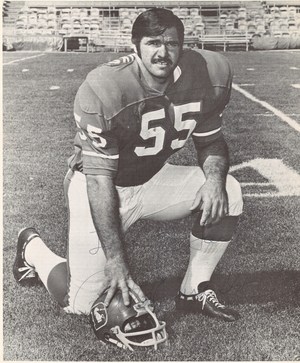 The rain didn't stop Bishop McCort from attending this morning's Walk to Defeat ALS.
Representatives from Bishop McCort Catholic High School walked with "For Pete's Sake" in honor of Pete Duranko '62. The walk is an exciting opportunity for participants to work together to support those affected by Lou Gehrig's Disease and to spread awareness of the urgency to find treatments and a cure. Click here to make a contribution.
Pete Duranko '62
Pete Duranko, a fullback-defensive tackle at Johnstown Catholic (now Bishop McCort), was the first Crusher football player named to the Associated Press and UPI All-State Team as part of the 10-0 team in 1961. During his illustrious career at McCort, Duranko set career school records with 3,234 yards rushing, 3,412 combined rushing and receiving yards, and 49 touchdowns scored. Known as “The Diesel” around the halls of Catholic High, Duranko ranked twice in the top five in school history for rushing yards in a season, the only player in school history to accomplish such a feat. In his senior season, Pete rushed for 1,450 yards, which is third all-time and he is fifth all-time with 1,350 yards rushing in his junior season. During his senior season, Pete was second on the team in scoring on the Crusher basketball team.

Following graduation from McCort, Duranko went on to star at the University of Notre Dame and was a part of the Fighting Irish’s national championship team in 1966. Duranko then played eight seasons for the Denver Broncos in the National Football League. Duranko has been inducted into the Pennsylvania Sports Hall of Fame and was part of the Class of 1973 induction into the Cambria County Sports Hall of Fame.