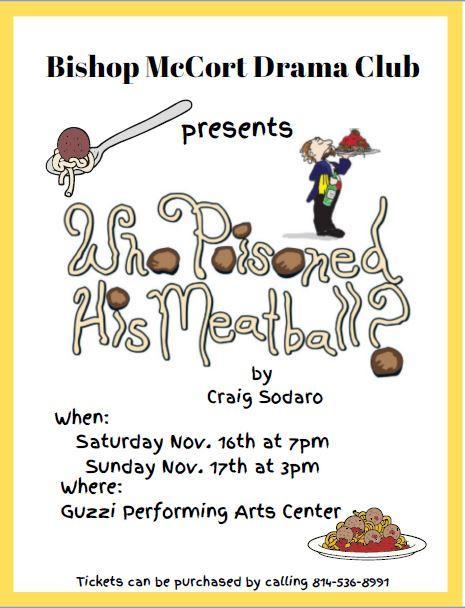 The Bishop McCort Drama Club presents "Who Poisoned His Meatball". Saturday November 16th at 7pm and Sunday November 17th at 3pm in the Guzzi Performing Arts Center. This production has plenty of audience participation for a fun packed event.

When the prosperous and pompous Nero Sharpe dies suddenly after eating a meal at Luigi’s Italian restaurant, everyone asks, ’Who poisoned his meatball?’ After all, he practically owned the whole town. Hilarious accusations — and condescending remarks — fly among the customers and staff members. Included in this motley crew are several who could benefit from Nero’s untimely demise, such as his wife, his bickering mother-in-law and his not-too-bright secretary who also happened to be his mistress. Other restaurant patrons get involved by finding clues and providing revealing tips. As head chef Basil Baker rounds up the evidence and suspects, the wacky characters join in a surprising finale to reveal who killed Nero Sharpe. Was it the salad chef, Amaryllis, who brought out the fatal food plate? Or could it have been Luigi, desperate to escape the clutches of Nero’s blackmailing schemes? What about Phyllis North, the ambitious reporter bent on getting a job at the ’National Snoop’? Would she kill for a front-page story?

The zany customers and staff of this fast-paced crime comedy retrace their steps in a unique and entertaining flashback sequence to unravel the meaty mystery, and you’re invited to join the dinner party!

Hors d’oeuvre will be served at intermission along with the opportunity to win baskets. Tickets are $10 for adults and $5 for students. To get more information or purchase tickets, call 814-536-8991.