About Us » School History

A Place Born of Dedication and Devotion

In the years following World War I, parishes in both Altoona and 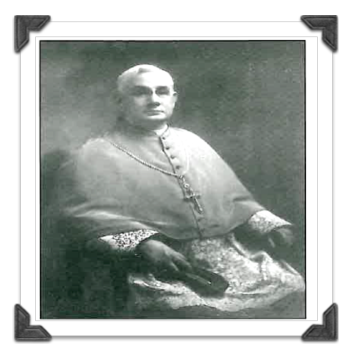 Johnstown felt a great need to have their youth continue their Catholic education at a Catholic high school instead of attending a public high school. When Bishop Eugene A. Garvey died in October, 1920, John Joseph McCort, co-adjutor Bishop of the Altoona Diocese, succeeded him.

A former seminary instructor and professor at St. Charles Boromeo Seminary at Overbrook, PA, Bishop McCort, a native of Philadelphia, was strongly influenced by his Catholic education, his heroic father who died fighting for the Union in the Civil War, and his religiously devout mother. He was a man of wisdom, prudence, fortitude, and charming personality which served him well until his death on April 21, 1936.
The Early Days -- A Brief History

In January, 1922, to meet the challenges that faced him, Bishop McCort held a 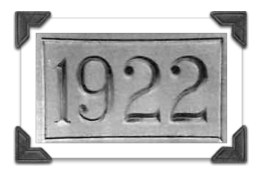 meeting of concerned parishioners in Johnstown. He told the parishioners that, if they wanted Catholic high schools in both Johnstown and Altoona, each community would each have to raise $100,000 to build its own high school. He organized a 3-week campaign. Each family was to pledge a minimum of $25 and the more affluent were expected to donate more. Soon land was purchased, building contracts were signed, and, on June 25, 1922, the cornerstone was set for the Johnstown Catholic High School building at 25 Osborne St. The plan was to have a freshman class begin each new school year until all four classes were present. 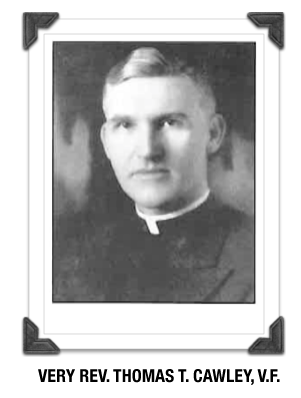 In December 1922, with planks laid on the freshly varnished floors and blackboards yet to be mounted, the 127 freshmen students who were already enrolled in Johnstown Catholic High School but attending classes at St. Joseph’s and St. John Gualbert’s schools arrived. With the students came four nuns as instructors. The course offerings were Latin, English, history, algebra, and religion. Fr. Thomas T. Cawley was appointed as its first principal, a vocation that he would perform for the next 28 years.

The 1923-24 school year brought four more nuns, Rev. James Fitzgibbon, and 130 more students. French, biology, and commercial courses were added to the curriculum. Fr. Francis McCreesh was named athletic director and became the coach of the first varsity basketball team fielded by Johnstown Catholic High School. For the 1924-25 school year, varsity football and baseball, in addition to girls’ basketball, were added. That year, the boys’ basketball team won the city championship and went on to compete in the National Catholic High School Tournament in Chicago. 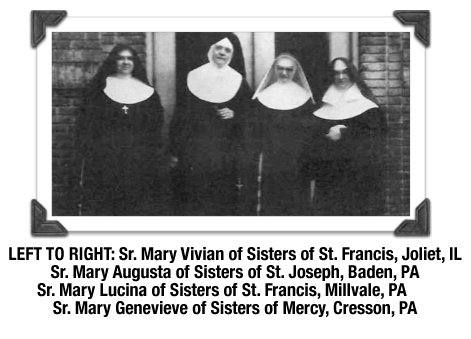 By the time of the first commencement of the Class of 1926, with its fifty seniors, on June 13, 1926, JCHS needed more room for its burgeoning enrollment and additional school programs such as debate and orchestra.

Another successful fund drive in 1929 brought about construction of a combined gymnasium and auditorium. In December, 1929, Bishop McCort dedicated the new structure. Dramatic performances on the built-in stage, basketball games, school dances, the Junior-Senior prom, and the 1930 Commencement were held in the new facility.
The Great Depression and the 1936 Flood

The Great Depression hit everyone in Johnstown. Many, completely destitute, were without both shelter and food. Others, a little more fortunate, had a roof over their head, but nothing much to eat. Those lucky ones with food on their table had not even scraps to spare. Of course, no one had money. A popular song of the day lamented, “Brother, can you spare a dime?” However, it was a time when Johnstowners helped each other survive. This remembrance typifies that great American spirit which helped Johnstown survive the Depression. And at Catholic High, Fr. Thomas Cawley would not permit boys to take commercial classes.

As if that was not enough, then came the 1936 Flood. The second disastrous flood struck on March 17, 1936, causing property loss of over $50M. Melting snow and ice from the surrounding hills and a steady rain caused a gradual rise of the Conemaugh and Stonycreek rivers that rose to 18” in an hour.

When the swollen rivers started overflowing their banks onto the streets, a general flood warning was issued at 3:00 p.m. As the water rapidly rose, the Valley Pike became part of the widened river. Before long, Catholic High was under water as was all of Johnstown. The flood reached its peak at midnight and thereafter receded. Water was at a height of 14’ at the public safety building. Recovering from the aftermath of the flood took a long time. Nonetheless, Catholic High celebrated its first Mass in the school.

World War II left its mark on Johnstown Catholic as it did the rest of the nation. The student body constructed an Honor Roll in front of the school depicting the names of their schoolmates who had left to serve our nation in the armed forces. Some were members of the Class of 1943 whose graduation was postponed due to their draft notices. The 1945 yearbook listed the first KIAs (killed in action) and the Class of 1946 dedicated its yearbook to the 29 students who made the ultimate sacrifice in service of God and country. On May 8, 1945, the war was over.

On February 1, 1951, Fr. Cawley tendered his letter of retirement and assumed the pastorate of Visitation Parish. Fr. O’Leary also left for an assignment to Our Lady of Victory Chapel in State College. Fr. Linford F. Greinador took the reins as the new principal to begin a new era of growth and achievement. 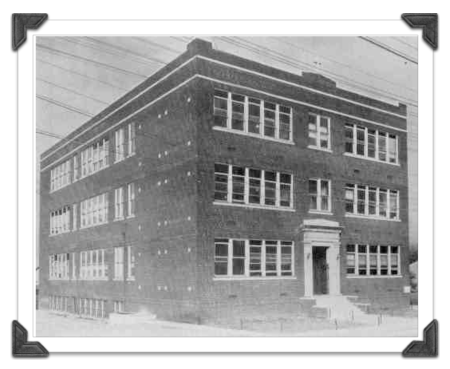 When Bishop Richard Thomas Guilfoyle died on June 10, 1957, he was succeeded by Bishop Howard Joseph Carroll. Bishop Carroll set forth a Diocesan Development Plan that included expansion of the Johnstown Catholic High School building to address the needs of an increasing student and faculty population. Another successful fundraising campaign raised the necessary capital for the expanded wing to the original building that would accommodate 1,500 students in grades 9-12. Special designs were made to the architectural plans for the science, commercial, and music departments as well as a permanent chapel for the school community to celebrate the Eucharist. Construction began in 1960 despite the death of Bishop Carroll on March 21, 1960. Bishop Joseph Carroll McCormick was appointed on June 25, 1960.

Despite the national turmoil of the ‘60s, Bishop McCort High School remained a constant in the lives of its students and faculty and staff.

On May 27, 1962, Bishop McCormick dedicated the new facility and christened it “Bishop McCort High School” as a fitting tribute to the man whose vision had begun the work 40 years before. Classrooms on all three floors of the Irene St annex had to house the entire student body since the 1922 Osborne St section, including the cafeteria, was closed for a complete renovation. The 1962-63 school year brought many more changes to Bishop McCort High School, including a new principal—Fr. J. Clark George. The old gym was gutted to make way for the present cafeteria and library. Sixteen new teachers joined the faculty, followed by another 14 the following year. A short six years later, Bishop McCort High School would see, yet, another bishop. Bishop McCormick was appointed Bishop of Scranton and subsequently succeeded by Bishop James John Hogan on May 23, 1966.

In January 1967, Fr. Richard Hovanec succeeded Fr. George as principal. Due to an increasing shortage of nuns and an exploding student population, lay teachers became the norm. The Diocese consolidated its elementary schools into 7 buildings.

The new decade ushered in changes in societal norms and an escalation to the Vietnam war with its peace demonstrations and civil rights struggles.

For the first time its history, Bishop McCort would solicit the input of its female students in selecting new school uniforms. The choice? Dark red-green plaid skirts and vests.

The ‘70s brought two more setbacks to the Bishop McCort community. The first was a fire that gutted the gym and water damage to the music and locker rooms beneath. Several fundraisers later, the gym was repaired by the spring of 1977.

Then it happened—another flood. The Flood of ’77 collapsed the walls on the lower floor and the boiler room was filled with mud. Thousands of dollars of band uniforms and equipment were destroyed. Six weeks later, clean up completed, school started on time. Early in 1978, Bishop McCort’s students would see another principal in Fr. James F. Bunn as Fr. Hovanec had become pastor of SS. Cyril and Methodius.

Fr. James Crookston replaced Fr. Bunn as principal. He brought with him former McCort graduate Fr. William Rosenbaum to serve as assistant principal and dean of discipline. It was during their administration that the Christian Service requirement of 25 hours became mandatory. In 1987, Bishop McCort would see another bishop leave and another succeed him. Bishop Hogan retired on October 17, 1986, and was succeeded by Bishop Joseph Victor Adamec on March 12, 1987. Bishop McCort would also see its first lay principal in its history. On July 1, 1989, William Rushin took the reins from Fr. Crookston.

The decade of the ‘90s brought with it its share of achievements and transformations. In 1991, the Diocese changed its student dress code to solid colors to create a more uniform ‘look” at its three high schools.

In 1997, Rushin resigned. In the spring of that year, Sr. Charmaine Grilliot, Diocesan Director of Education, appointed Sr. Donna Marie Leiden, a Sister of Charity and a former principal at two Catholic schools, as McCort’s 10th principal. Sr. Donna is the first woman to serve as Principal at McCort.  Sister Donna Marie’s expertise in secondary education led to the enhancement of the curriculum which resulted in the creation of the College in High School Program.  This program created a unique opportunity for McCort students to earn college credit while taking honors-level courses at BMHS.  Sister Donna Marie also established a high school endowment for the benefit of the school.  Sister Donna Marie also created the very successful Named Scholarship Program which supports current McCort students with tuition support while allowing alumni and friends of the school to honor family members.

In 2006, Bishop Adamec appointed Sr. Donna as Diocesan Director of Education. Kenneth S. Salem, BMHS Class of 1987, would become McCort’s second lay principal. Salem oversaw the renovation of the Osborne Street campus. The original Johnstown Catholic building was completely renovated.  Modern classrooms with state of the art computers and electronics replaced the antiquated facilities.  Other projects initiated during Salem’s tenure include the renovation of the Science wing, the upgrade to the boys and girls locker rooms, and the construction of the new Bach Wellness Center.

On October 8, 2008, control of Bishop McCort High School was turned over to a Board of Trustees to be run as an independent non-profit 501-C3 corporation. The new board of trustees would have fiduciary responsibility for the high school.  The Board is responsible for operations at the high school, including policy development, hiring of a principal, marketing and budget.  The Board of Trustees will emphasize fundraising and keeping Catholic education affordable in the Greater Johnstown area.  McCort will maintain its Catholic identity, but the role of the Diocese in paying the bills will be reduced. The Diocese of Altoona-Johnstown will still ensure the Catholicity of the school and monitor the delivery of religious education
Dan Hummel, first Chairman of the Board of Trustees Bishop McCort Catholic High School Inc., praised all parties involved in the new configuration. “From the beginning, everyone’s motivation has been on the kids,” he said. “Goals include making a Catholic education available to all who want it as well as capital improvements.”

Inaugural members of the Bishop McCort Catholic High School, Inc., Board of Trustees:

Appointed July 1, 2008
Current Trustees are listed on the Leadership section of the website.